Since 2008, I have made my own Christmas cards. They motivate me to create an image that I know will be seen by my closest friends and family (a sympathetic but sometimes very critical audience) and in a production run of about seventy or so, I can tweak the image and explore variations that deepen my journey into what I am trying to express. This year I am also sending them to those persons who have purchased my paintings as a marketing tool. 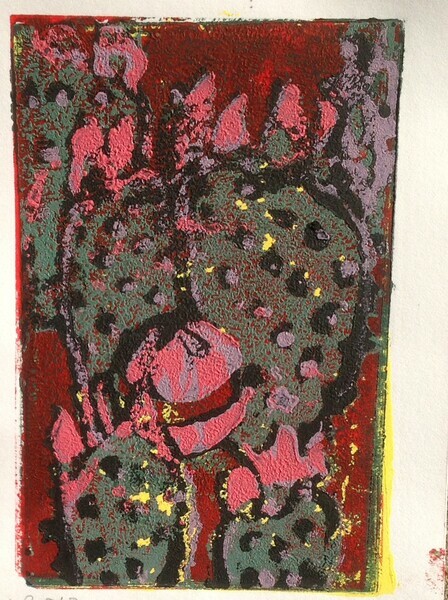 To those who want to try this interesting but highly time consuming self promotion, here are a number of pointers. Everything is backwards. The first step is the price, which is usually the last step in a painting. It's always free.

Then, you have to get the envelopes, which will in turn determine the size of the image. (Thanks to Victoria Cowan for this teaching.) The first year, I did image first and then envelope, and had to make my own envelopes, a hideous task. Lately I have gone to Wal-Mart at their post Christmas sales and bought premade cards. I can probably get the card stock and envelope for under .25 per item. I then cut the card in half and glue one half to the front of a card, getting two cards for use as a base to affix the image. However, this is a high precision job and next year I think I will buy only store made blanks, marketed under the name of Creative Cards. This is close to $1.00 per card.

The above is the image from 2012 of a prickly pear cactus with a Christmas ornament. This is a linocut, done by the reduction method, the sequence being yellow, dark red, purple, black and finally fuschia. Sadly no one ever saw this rich image. It was a trial run to test the colours. All the "production" items had a white background, a much less interesting image. Morale: before you begin to cut, think about the background!

Since I owe so much to Victoria, I have developed also a tradition of sending her a card, which she kindly shows to her students as part of their education on what and what not to do.